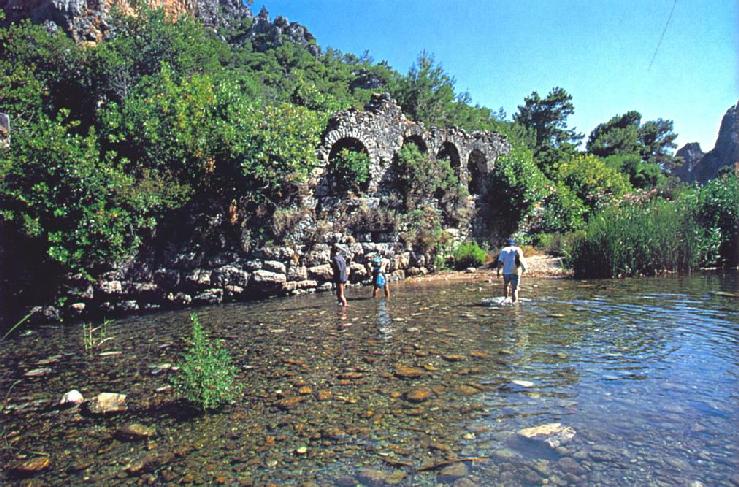 According to the believes,the word of Olympus means that ‘’great mountain’’.More than 20 mountains have this name and some cities and towns also.The most famous hill is Thessalian Hill which is located Northeast of Greece and considered the house of Greek Gods.The name of Olympus Ancient City is coming from Tahtalı mountain which known as Olympus Mountain.Tahtalı Mountain is far 10 km from norht of the city and it has the fire that is never extinguishes which is known as Yanartaş today.Olympus was one of the most important city in the Lycia civilizations.Foundations of the city’s ancient Helenistic period were built about 300 B.C.

Olympus' historical records trace in the Roman governor of Sicily beated the largest pirate Zenicetes in 78 B.C.Zenicetes surrounded the all coastline under the sovereignity,has stronghold the Olympus to himself.After that,the city was ruled again,it was declared like ''ager publicus''.The pirates hold a weird victim and secret rites for the Persian God Mitras was believed.According to wide belief of most of the eastern world,Mitras was the pure spirit and God of light in the Persian mythology.Lycia was joined to the Roman Empire at 43 A.D.Lots of festivities was organized for the Greek God Hephaestus who was the protector of the city Olympus.According to the records,the Emperor Hadrionus visited the city at 130 A.D

Also,Olympus hosted a piskoposa in the process to be Christian of Roman Empire.From the 3. century,population of the city slowly declined and the city has lost its former importance as a result of continuously attacking of the pirates to the city.At 11. and 12. centuries,the city was built and used as a trading part during the crusades by the Venetians and the Knights of Rhodes.The Olympus city has been abondoned when Ottoman Navy dominated at eastern  Mediterranean at 15. century's.Olympus has a large section of Turkey's southern coast that including the city of Antalya Olympus-Bey mountains national park. Bey Mountains are located in the western wing of the Taurus Mountains.With turquoise water of Mediterranean sea can be seen between lush pines and cedar trees when descend down from its snowy hills

Because of the Olympus is a mojor historical site,it is blocked by law to become tourism center.Thus,the natural structure of the region is conserved and Olympus has become a unique natural paradise which is for spend a pleasant time for all visitors.In the most recent,the ancient city was conquered by nature.To explore the city,you should make an adventurous journey with going through the forest,seeing wild life,and hearing smell of pine and laurel trees.The spectacular coastline is not only home to sun lovers....Sea turtles come to lay their eggs to the Olympus-Cirali beach at summer nights also